I felt so bad for Kyle Williams, the guy being blamed for the 49ers loss to the Giants, ultimately putting the Giants in the Super Bowl. So many mean people tweeted and posted incredibly awful things about Kyle. Grow Up! It's a game!! Sometimes instead of teaching lessons to our young ones, we should learn.

There's at least one letter I hope he got, though. Ben Mankiewicz at The Huffington Post passes along a letter written to Williams by his friend's little boy: a 7-year-old named Owen. Owen loves his 49ers and was as crestfallen as any other Niners fan when the Giants pulled out the overtime victory. Here's Owen's story, from Mankiewicz:

He was crying, saying of Kyle Williams, with the distinct sobs of a seven-year-old between each word, "But... why... did he... have to... fumble?"

Trying to get his son to stop crying, Michael asked him, "If you feel this way, how sad do you think Kyle Williams is?"

Owen paused a second, then asked his dad, "Can I write him a letter to make him feel better?" 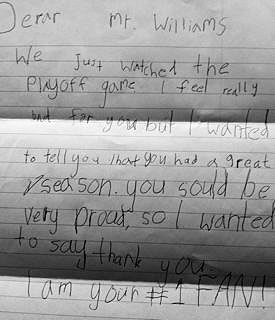 All together now: Awwwww.

Here's the full text (and yes, it's unedited for grammar and spelling, but this kid is 7 ‒ the Twitter lynch mob has no such excuse):

We just watched the Playoff game. I feel really bad for you but I wanted to tell you that you had a great season. you sould be very proud, so I wanted to say thank you.

All it took to transform sobbing, frustrated anger into human compassion is one thoughtful question from a concerned father. I love that. It's human nature to get angry when things don't go our way; everyone does. But as evolved humans, we learn to get past that, and quickly move on to understanding, patience and basic respect for our fellow man.

Filed Under: kyle williams, lesson, letter
Categories: Family, National News, Sports News, TV News
Comments
Leave A Comment
Minnesota Couple Shamed By Grinch Neighbor For Holiday Lights Display
COVID-19 One Year Later: A Letter To The End Of February 2020
An Open Love Letter To One Of The Things I Miss Most: Concerts
FTC: Beware Of Scammers Impersonating Us Via Letter
I Learned My Lesson, Take Inventory Of What’s In Your Wallet, Here’s Why
Minnesota Man Asks For Letters In Hospital
Is the Fargo Woman Giving Letters Instead of Halloween Candy Really Just a Big Hoax?
Vikings: New Metrodome Stadium Has Hidden Costs
Government Sends Foul-Mouthed Letter To Company